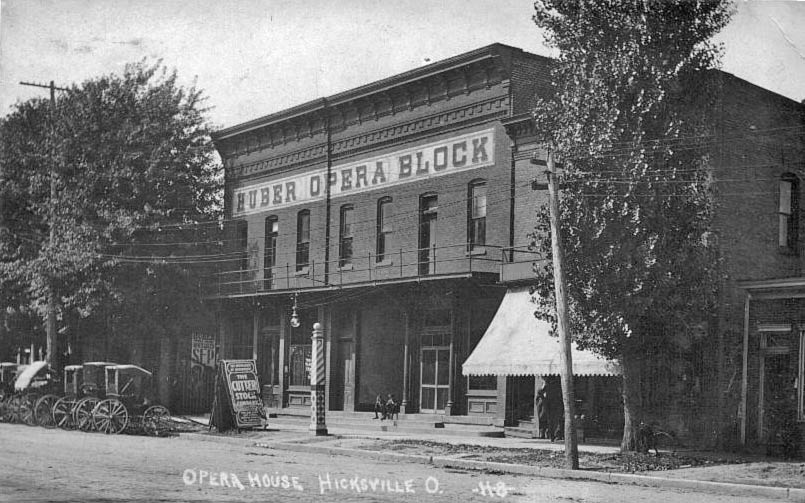 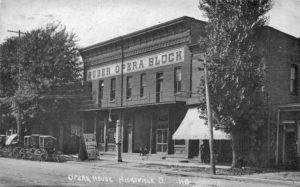 The Huber Opera House had its humble 1882 beginnings as the two story Mackey’s Brick Hotel. At that time, the building was roughly thirty feet across. Within the decade, the Huber family had purchased the hotel and expanded it about twenty more feet to the west, making a commercial room available for businesses. Traveling salesmen also made use of the hotel as a midtown display area for their wares. Rooms above were small by today’s standards, but fitted with a heat stove, window, and simple furnishings.

After the Pettit Opera House, at the corner of High and Main Streets, burned down, George Huber went into action with plans to transform the hotel into a showplace for live acts. His experience as an NYC hotel and theatre owner gave him a wealth of practical knowledge into the mechanical aspects of theatre needs as well as an artistic eye for outfitting a building for maximum impact.

Opening night was described as a dazzling occasion, with ten arc lights illuminating what was called the audience room and the sophisticated color palette taken from the spectacular stage curtain. Rich golds, blues, and olive greens played against the silvery aluminum and delicate cream tinted terra cotta. Elaborate designs in floor tiling echoed the colors at the building’s front entrance where beautiful paneled doors opened to a spacious lobby.

Theatrically speaking, the Huber was used as a tryout theatre for plays headed to bigger houses in Chicago and New York. William Jennings Bryan 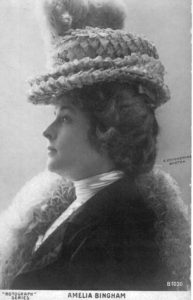 was said to have appeared at the Huber along with authors of national note. When local-girl-turned-Broadway-star Amelia Bingham brought her company to town, people paid the unheard of admission price of 75 cents to see the show. Mutt and Jeff’s appearance was advertised on post cards sent to theatre patrons and handed out in advance. In November of 1899, a wild horse was tamed onstage before the eyes of an amazed audience.

For most of its history, the Huber was also a center of community activity. High school graduations and concerts were held there. Class plays and community productions such as Emily White Hull’s Roof Garden Revue and George Patterson’s historical pageants debuted on the Huber stage. War bond rallies, Red Cross meetings, and conventions were held in the auditorium.

Then came a time when the building fell into out-of-town ownership and into disrepair and disrepute. Extra law enforcement officers patrolled on weekends and locals avoided downtown Hicksville after dark. In 1994, neighboring business owner Mary Ann Barth suggested the Hicksville Historical Society look into rescuing the building. It took nearly four years to gather enough information and interested parties to work on building acquisition. Area individuals, organizations, civic groups, and government officials formally banded together in 1998 with purchase of the building made by The Huber Opera House and Civic Center in December of 1999. (Click on the thumbnail above to see an artist’s rendering of what the restored opera house may one day look like.)

Many groups and business owners volunteered time and money to further the restoration of the Huber, with the Historical Society working in various capacities until restoration gave way to renovation. While the focus and make-up of the Huber Board has since changed, the Huber remains a place where generations come together and where pride means preserving the past and looking ahead to the future.

Excerpt from an 1895 News Article:

“A GREAT SUCCESS was the Grand Opening of the New Opera House: Mr. George H. Huber’s Beautiful Gift to Our City—An Elaborate and Beautiful Structure”

By the greatest possible exertion was the new opera house ready for the grand opening this evening. The great experience of Mr. Huber who has been present for a number of days, alone making it possible to open the house at the designated time. Painters, carpenters, and drapers were busy until the very last moments. To say their work as been well done would but feebly express it. Mr. George Huber, the builder, ably seconded by the large staff of men who worked on the building have gave [sic] our little city the most perfect and beautiful house for public amusement in Northwestern Ohio. Language is inadequate to describe the structure as it fully deserves. 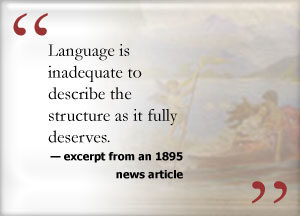 Being on the ground floor, the exterior is not so pretentious as some that have business houses under them. But this very fact adds to the building for a public play house.

On entering the large and spacious lobby you are at once struck with the artistic and expensive finish and design of the floors which are laid in tile. The box office is also a model of its kind being built with an eye to business and tone.

You now enter the great doors that lead to the audience room. At once, the light dazzles your eyes, that our modest little city should have so beautiful a house seems increadible [sic]. No expense has been spared, all that skill and the lavish use of money could do has been done to beautify and make perfect the fine structure.

The floors pass away in a gentle slope to the large stage, the view from all points is pleasing and grand. The ceilings are done in a delicate cream tinted terra cotta, the side walls being in two lovely shades of the same.

The ceiling decorations are tastefully done in gold and blue, while the hangings are of the same shades. Dados are in plastico, and posts in bright silver aluminum and dainty terra cotta.

The stage front is in solid antique oak making a striking and catchy contrast to the lighter and more delicate walls and ceilings. The seats, of which there are nine hundred and fifty, are of rich cherry, handsomely upholstered in olive green mohair plush.

The stage fittings are on as grand and substantial plans as all other things about the house, each piece of scenery is by master hands, the drop curtain alone being undoubtedly the finest thing of the kind ever seen by our people, or of this part of the great state of Ohio. The stage is fitted with hoists as in all modern houses in large cities.

The carpeting is of the kind especially adapted for stage use, being reversible. The boxes are carpeted in velvet plush of great expense, the dressing rooms and roomy isles [sic] having the same material. A matter of especial pride in this last is the fact our own firm of Boon and Bevington supplied these fine goods. The boxes are draped in expensive portiers, designed and made especially for this house, being of rich and costly material. In speaking of the arrangements of the house for the convenience and health of the audiences. Large and roomy cloak and ladies and children’s toilet rooms have been provided for, while the heating and ventilating of the large house has received the attentions of experts in that line. Two four ton Smead heaters have been provided thus guaranteeing the perfect heating of the room while at the same time the air is completely renewed each thirty minutes.

The balcony is finished in and follows the same features of other parts of the house described above.

The house is lighted with ten arc lights with fifty lamps for use in dressing rooms, offices, and cloak room.

Clemmer and Johnson, the contractors who built the house, are Hicksville men, and it is a fact pleasing to our little city that we have so able and hustling a firm of builders. The speed and thouroughness [sic] of the work will be a lasting recommendation for them to all builders.

W. O. Hughs & Co., one of our large and enterprising firms, furnished the stage settings. J. C. Ryan, one of our city attorneys, deserves great credit for the active part he has taken, as Mr. Huber’s agent in the building and multitudious —

[Sadly, the remainder of the article was not clipped out of the newspaper.]

[Elsewhere in the book, Hicksville’s Amelia Bingham is listed as owning a traveling theatrical company with Henry B. Harris as manager.]